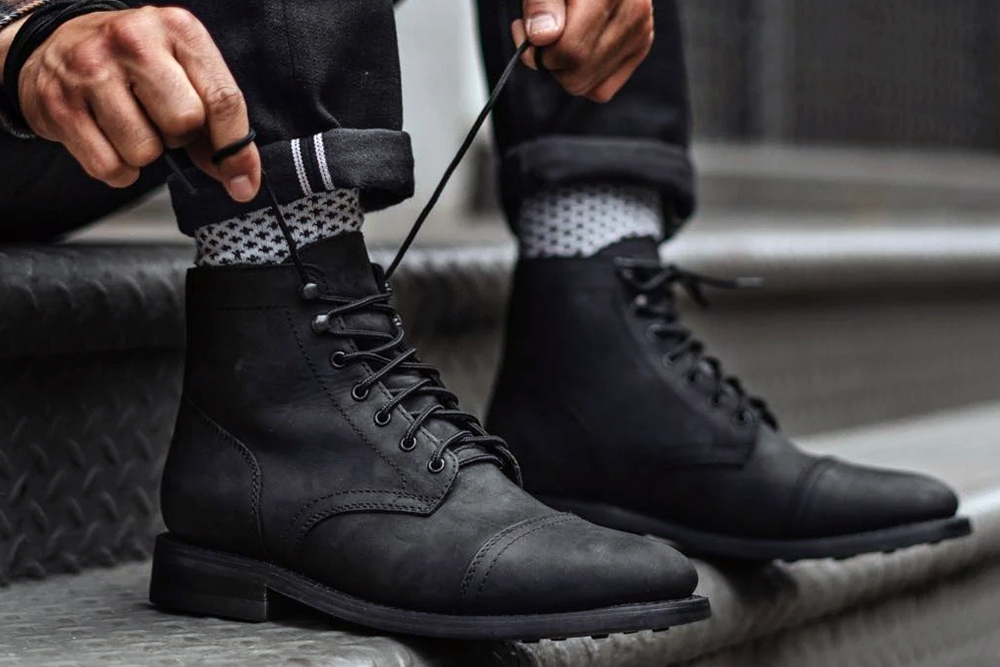 When the average guy searches for a pair of leather boots, he often wants boots that will age beautifully and can survive downpours. However, most of these boots tend to cost hundreds of dollars. And it’s not just the price; there are plenty of things to look out for before you can make a purchasing decision.

For this reason, we have compiled a guide on the things you should look out for when shopping for leather boots. Just follow our steps, and you will be able to get the best leather boots for you. Let’s begin!

There are actually plenty of differences between leathers. For instance, a boot that simply says “leather” is probably substandard. Instead, be on the lookout for something called “Full Grain Leather”. This is the type of leather you want; it ages extremely well, it is handsome, it offers ruggedness, and its quality is superior.

Contrarily, stay away from any boots labeled as “Bonded Leather”. Even though it sounds fancy, it’s anything but. These boots are made from a blend of shavings, dust, and leather bits. “Genuine” is decent if you’re looking for leather suede. However, these boots are not the best, especially on high-stress areas such as toes. Meanwhile, leather branded as “Top Grain” is superior to these other labels, and only “Full Grain Leather” outperforms it.

Can You Resole Them?

Sometimes, you want a pair of boots that will last for decades, and that even your grandkids will be able to wear. If that’s your goal, you shouldn’t look at anything other than resoleable boots. These boots are typically more expensive than the average pair. However, it’s for a good reason: they are typically the highest-quality boots you can buy.

When you’re searching for these boots, ensure they are made with either the “Goodyear Welt” or the “Blate Welt”. The Goodyear Welt, in particular, is the oldest, most durable, and most labor-intensive way to make a shoe. A strip of rubber or leather is used. It runs along the whole length of the boot’s sole, then it’s lock-stitched to the upper, insole, and sole.

This makes the boots easier to resole, whether it’s by hand or using a machine. The extra layering also offers some water resistance, not to mention additional foot support.

A significant number of boots that are marketed as being made for the outdoors actually aren’t. They have slick soles that have hardly any grip. If you’re looking for boots to wear indoors and on social events, these soles might be up your alley: they are dressy, flexible, and soft.

If you want something that you can go hiking in, though, you should get a studded rubber outsole. These soles have a decent grip, and they can easily handle wet surfaces. They also look versatile and sleek from the side. If looking formal isn’t an issue for you, feel free to get a Commando sole. These ones are chunky but tough and durable.

Not many people take not of the shank, but this is one of the most important features in a good pair of leather boots. A shank is basically a strip of hard material that is placed between the layers in the middle of the foot and the sole. It helps to provide arch support, it gives the boot some stability and protects the foot from any puncture damage.

The shank also helps to increase a boot’s lifespan. A good, durable shank will slow the boot’s disintegration and might even prevent it completely. Shanks are usually made from steel. However, if you plan to travel a lot with them, you might want to consider shanks that are made from the more airport-friendly wood, leather or even fiberglass. 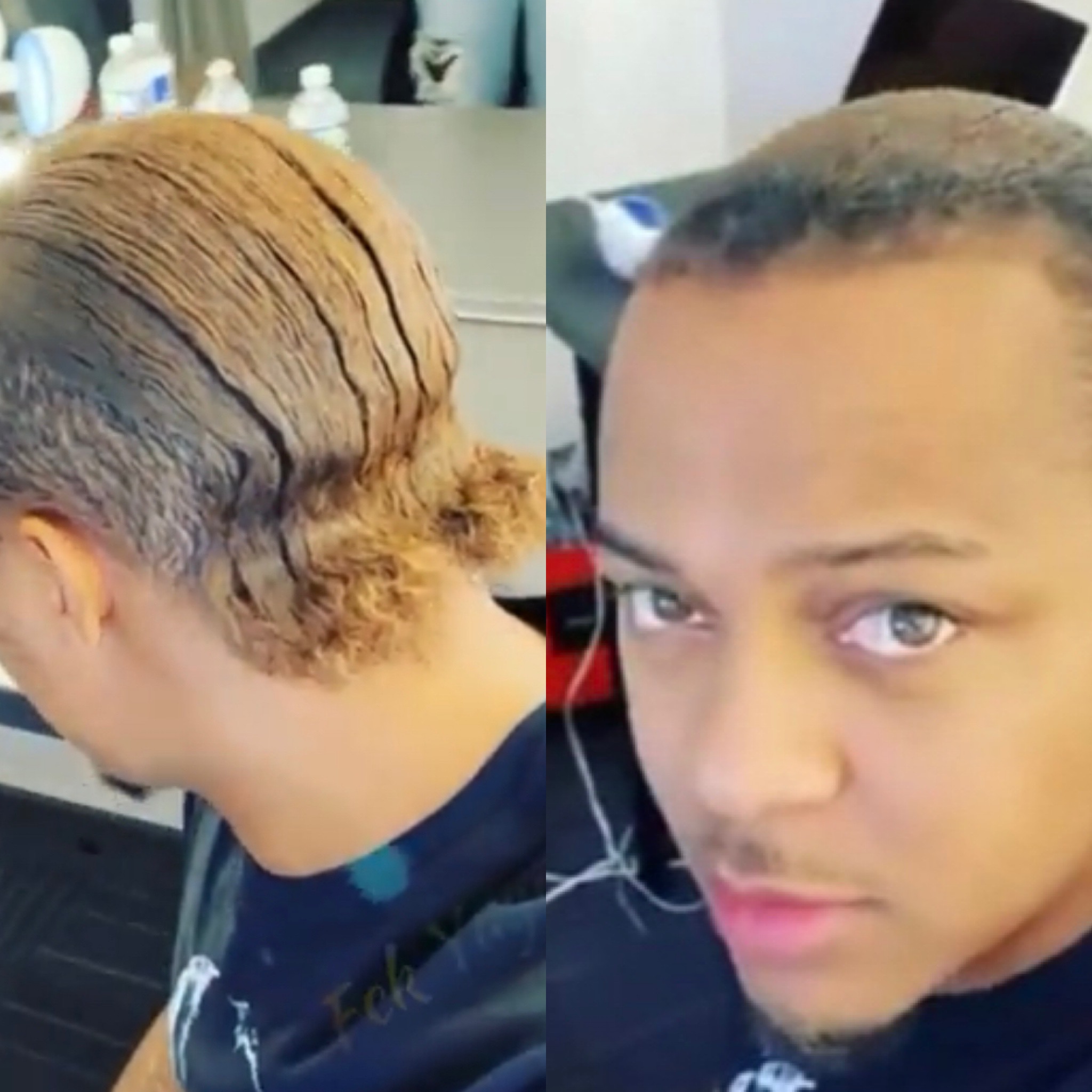 On Friday, the 34-year-old rapper and actor took to Instagram to share his latest look with the world: a super, straight, gelled down, slicked-back ‘do that had Bow looking like he came straight from 1960.

“My momma said I look like Billie D Williams,” the Growing Up Hip Hop star jokingly wrote as the caption to the IG video where he gave us a full, 360 look at the new hairstyle. He and his mom, Teresa Caldwell, also shared a laugh in the IG video as Bow Wow asked fans what they thought of the new style. “What yall think? Should I start rocking this?” Bow Wow asked in the short IG video, adding, “and don’t lie to me because it’s me. Like, y’all can say no. Y’all can go crazy in the comments.”

And in true Internet fashion, people did go crazy, especially on Twitter.

Here are some of our faves.

Bow Wow out here looking like Skully from Snowfall pic.twitter.com/afwq8911sz

Bow Wow look like Big Red from The Five Heartbeats “What are my office hours?!”🤣 iykyk pic.twitter.com/Vcpu5f1wxc

Bow Wow has been promoting a few hair accessories including his new The King Twist brush in collaboration with Red by Kiss. 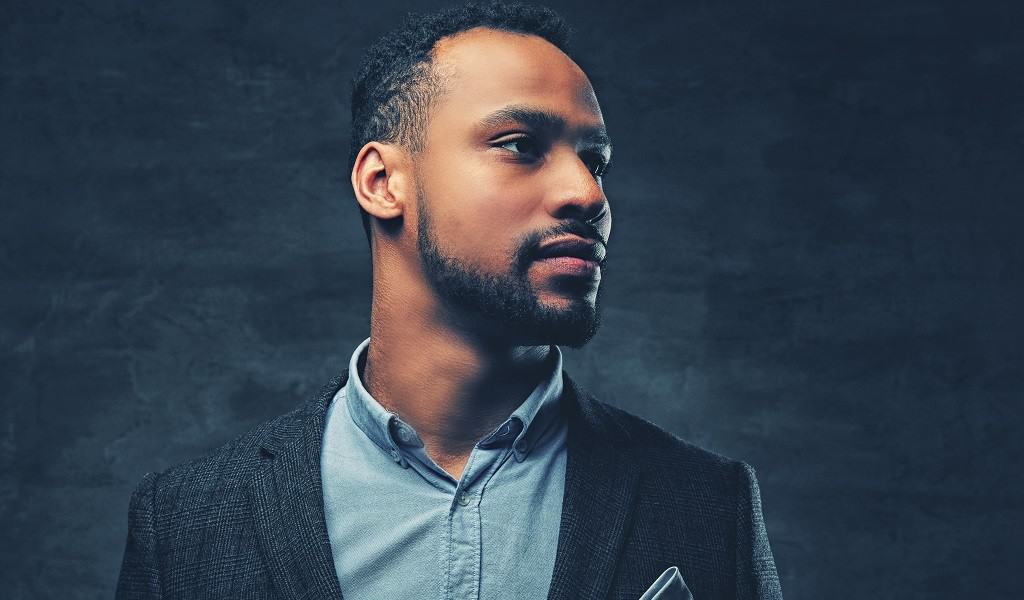 Stubble is one of the trickiest facial hairs to get right. Too long or too short, and it’s a mess. However, get it right and you will have a rugged good look. Stubble isn’t only for that rough, manly look though.

It can also soothe you if your skin is prone to irritation from shaving too often.

Maintaining the perfect stubble is almost an art form. But don’t fret! Below are some of the tips that will help you get and maintain that fresh look.

Trimmers are varied: they come in many price points, sizes, and styles. So, even if it takes a few tries, it’s vital to get one that best suits you.

Whatever you decide on, though, it should be durable. If you have sensitive skin, you might want to opt for a safe trimmer that has contouring head tracks for additional stabilization and comfort in hard-to-reach parts.

If your beard takes a while to grow, you might consider a budget option with various trim lengths and attachments.

Any beard shaver or trimmer you buy should have various blade guards to let you maintain several lengths of stubble. If this is your first attempt at getting stubble, a good option is to let your beard grow out then trim it down until it reaches a length that you’re comfortable with.

Doing this is simple. Just start by testing out the longest blade guard. If the stubble is too big, size one down. Repeat the process until you’re satisfied.

No matter how good you want your stubble to look, it needs a proper foundation. It’s just as important to take care of the skin beneath your stubble. You need a top-notch cleanser to balance your skin’s moisture and give your face a great base for that stubble.

As the stubble grows, it’s also important to have a proper beard conditioning and shampooing routine. This will keep the beard healthy and strong as it grows while keeping it safe from excess oils and dirt.

Facial hair often tends to grow beyond where it’s supposed to. When this happens, shave those patches to keep your stubble-looking uniform. The neckbeard, for instance, might significantly hamper your look.

Trim around an inch above your Adam’s apple. You should also trim your cheeks if your beard wanders a little too high up.

Beard oil is one of the most essential tools for your facial hair. Always use a few drops of it, since it will keep your face feeling great and your stubble soft. Just get the right beard oil for your skin type, and you’re all set!

Everything You Should Know About Shaving With A Safety Razor 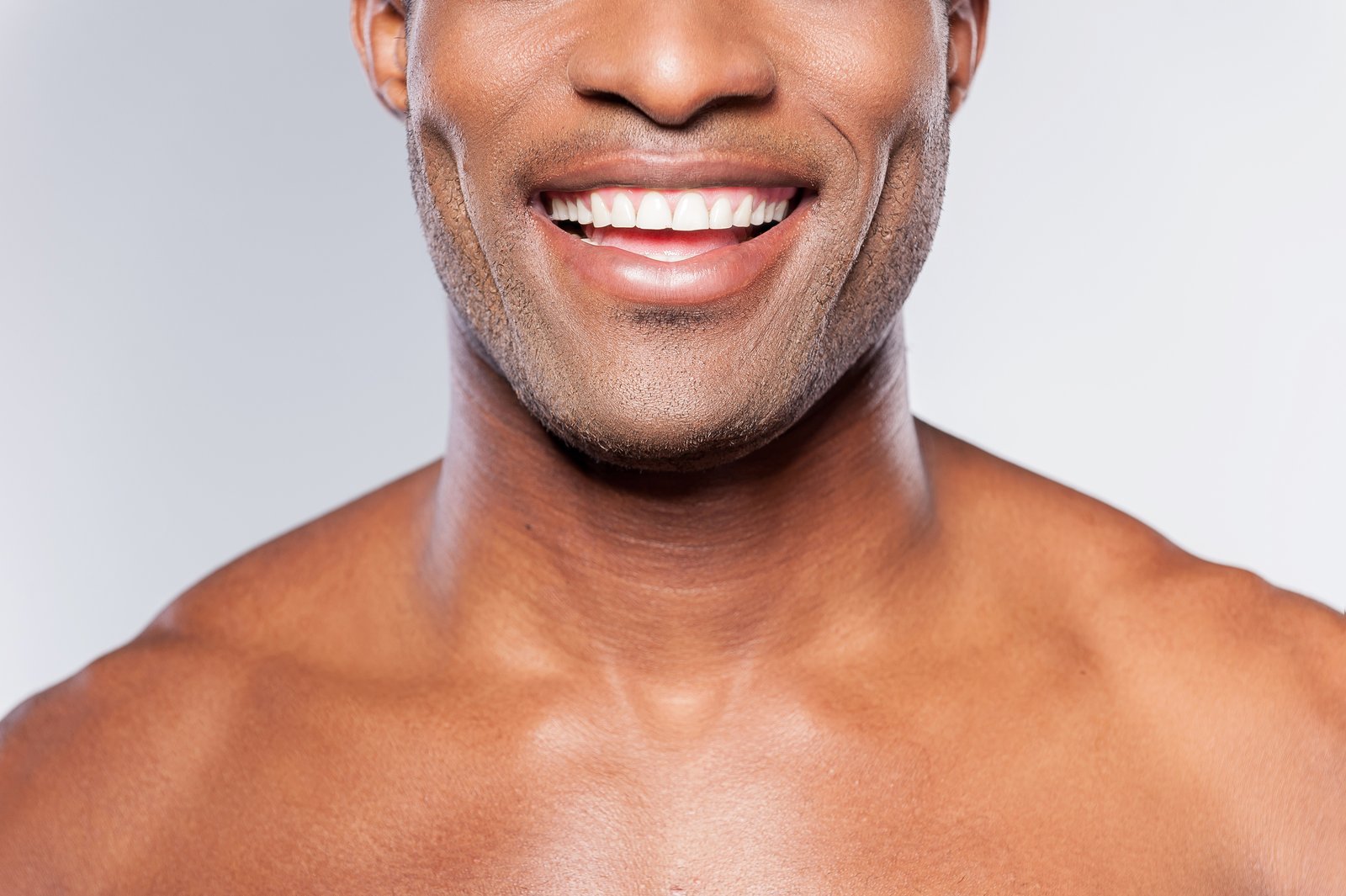 Shaving with a safety razor still remains a staple for most men even though the art of shaving has come a long way especially in modern times.

As a matter of fact, despite the advent of electric razors, old-school safety razors are still in demand.

Some men, in fact, prefer them to modern alternatives. Safety razors mainly remained the same in the century since their inception. However, there’s really no need to. They are easy to use, dependable, and familiar.

If you’re considering using a safety razor, we have listed all the major things you should know about them. This way, you can tell if they are for you or not.

Use It The Right Way

When you’re new to safety razors, start by going slow. Maintain a 30 to 45-degree angle between your skin and the blade; don’t hold it perpendicular to your skin.

Try not to go against the grain of your hair. If your hair coils too much, it might be better to avoid using a safety razor entirely—knowing which direction to shave will be tough to discern.

You should also avoid pressing the razor too firmly against your skin. It has a sharp blade, and you might nick yourself or even get an annoying razor burn.

Shaving With A Safety Razor is Affordable

A safety razor is dirt cheap, especially if you compare it to a cartridge razor. On average, the average annual cost of owning the latter is $240.

Meanwhile, the average annual cost of a double edge safety razor is barely $30. That’s over $200 in savings, which translates to around 8 pack refills if you have a cartridge razor.

The savings are insane. Provided you know how to use a safety razor, you’ll be laughing all the way to the bank; $200 might not seem like a lot, but it adds up.

Technically, You Can Shave Your Head With It

But we don’t recommend it. Shaving your chin, for instance, is tricky and needs your full concentration. It has sharp angles and different contours like dimples.

These make it easy to cut yourself if you’re not careful. So, this makes a safety razor a tad more challenging to use than a cartridge razor.

Now, imagine that difficulty but for the rest of your head. Technically, shaving your head with a safety razor is possible. But it will be laborious, slow-going, and just not worth the effort.

Acne is mainly caused by the buildup of dirt and oil in your skin’s pores. Living with it is not easy for most guys, so it’s always nice to find a way to reduce its occurrence.

If you currently use a cartridge razor, you’re not doing yourself any favors. It has up to 5 blades that are moving on your skin. They will start to fill your freshly-shaved face with your body’s natural oils. In turn, this will increase your rate of acne flareups.

However, if you use a safety razor, you’ll rarely go over your face more than 3 times. Through this, you’re minimizing the number of times that your pores are being messed with. Safety razors also carry fewer bacteria than cartridge razors, since their blades don’t have any clogging.

Get A Custom Shaving Cream

You can use generic canned shaving cream, but it might not be the best option for you. Instead, we recommend getting your hands on a custom shaving cream.

It will allow you to get the closest and best shave. This way, you’ll be able to find the one that best suits your skin. Just try getting a new type of shaving cream whenever your current one ends. You will eventually find one that perfectly fits your taste.